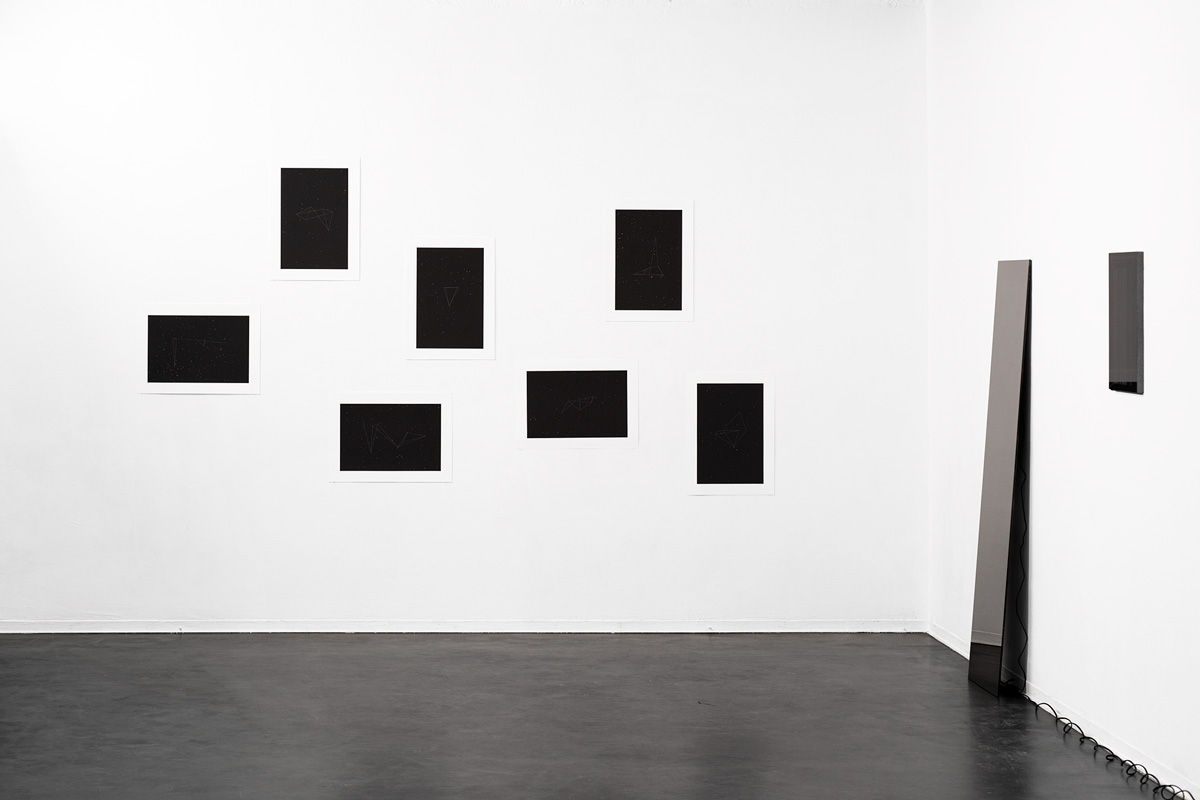 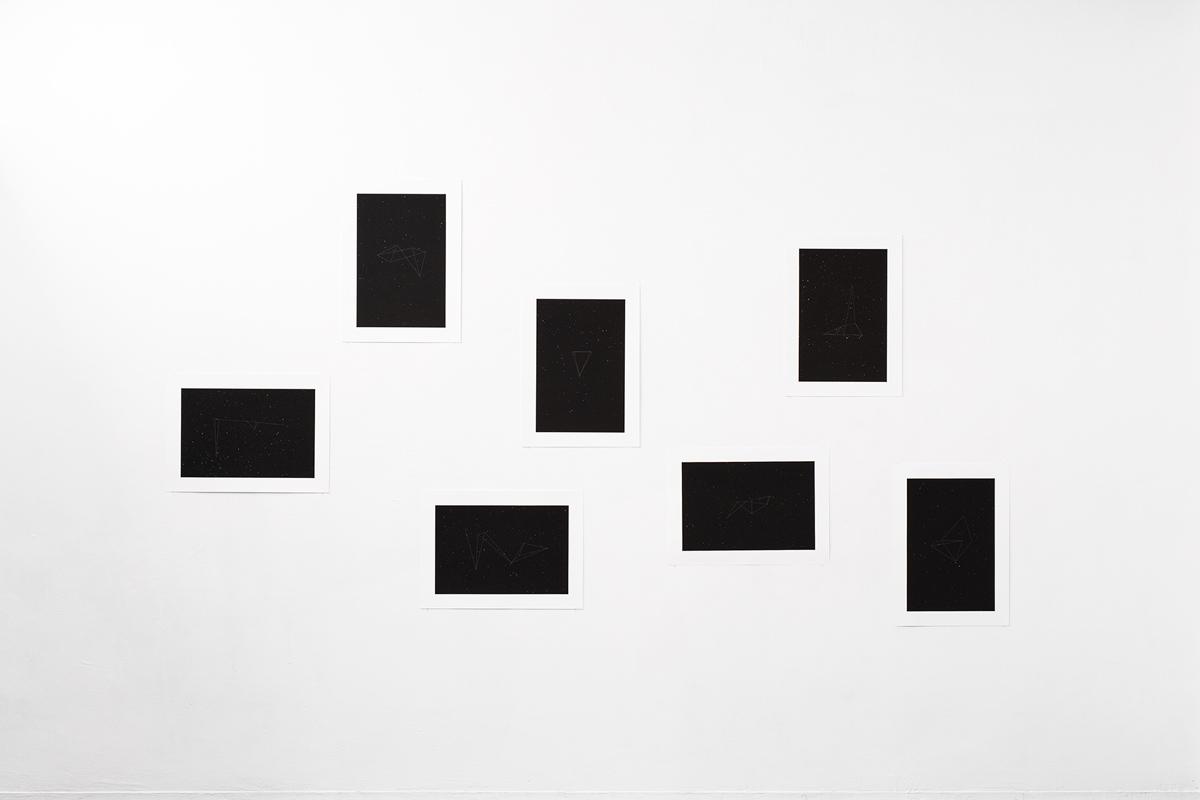 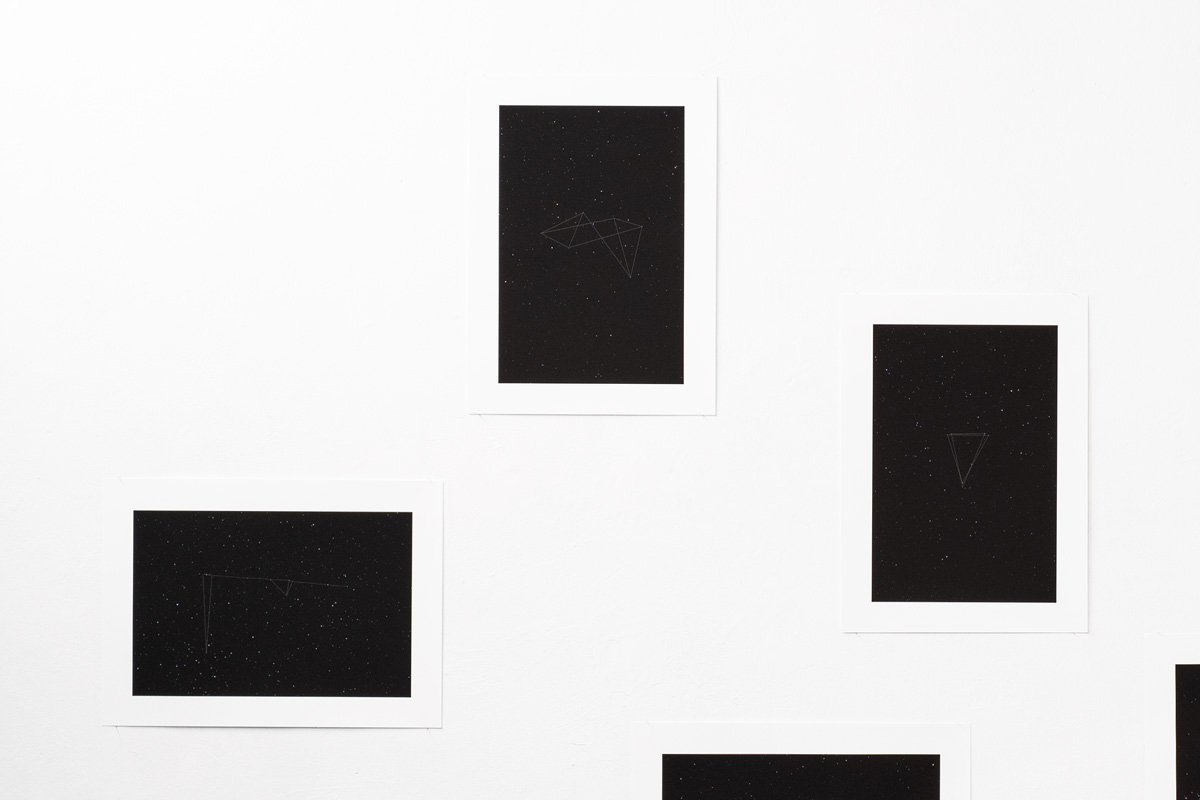 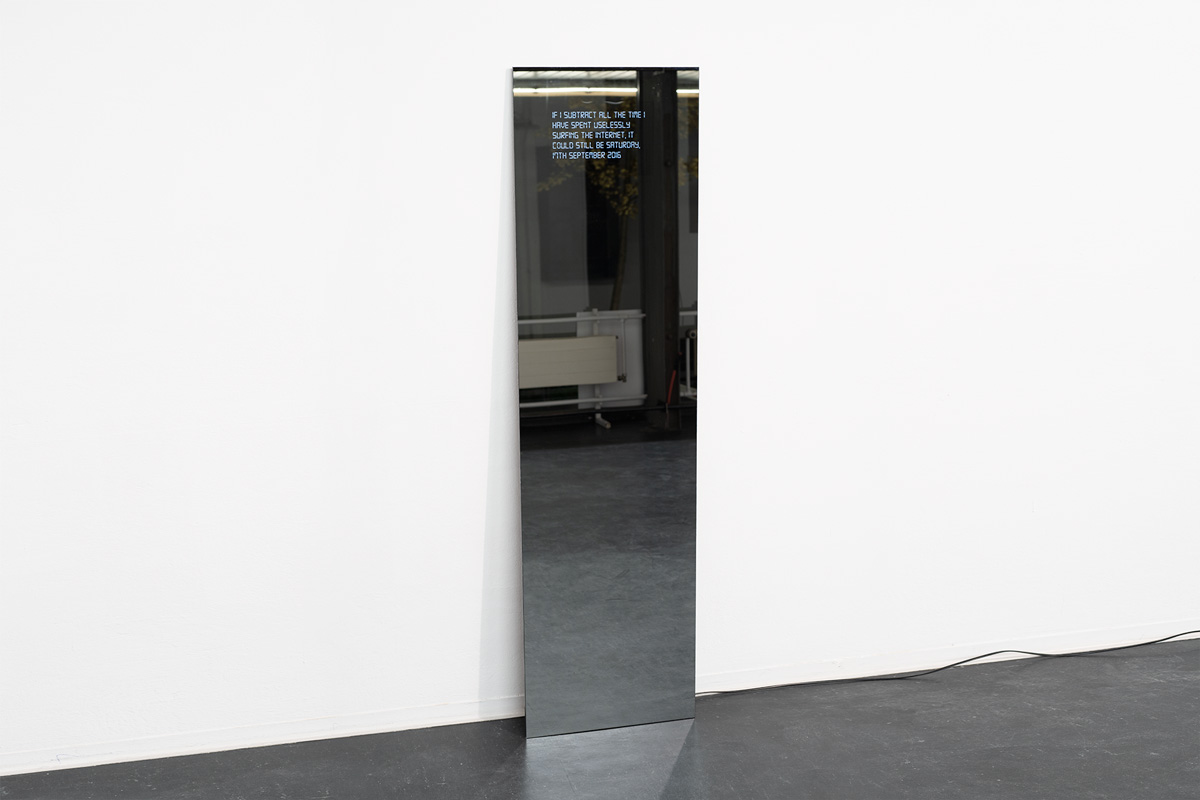 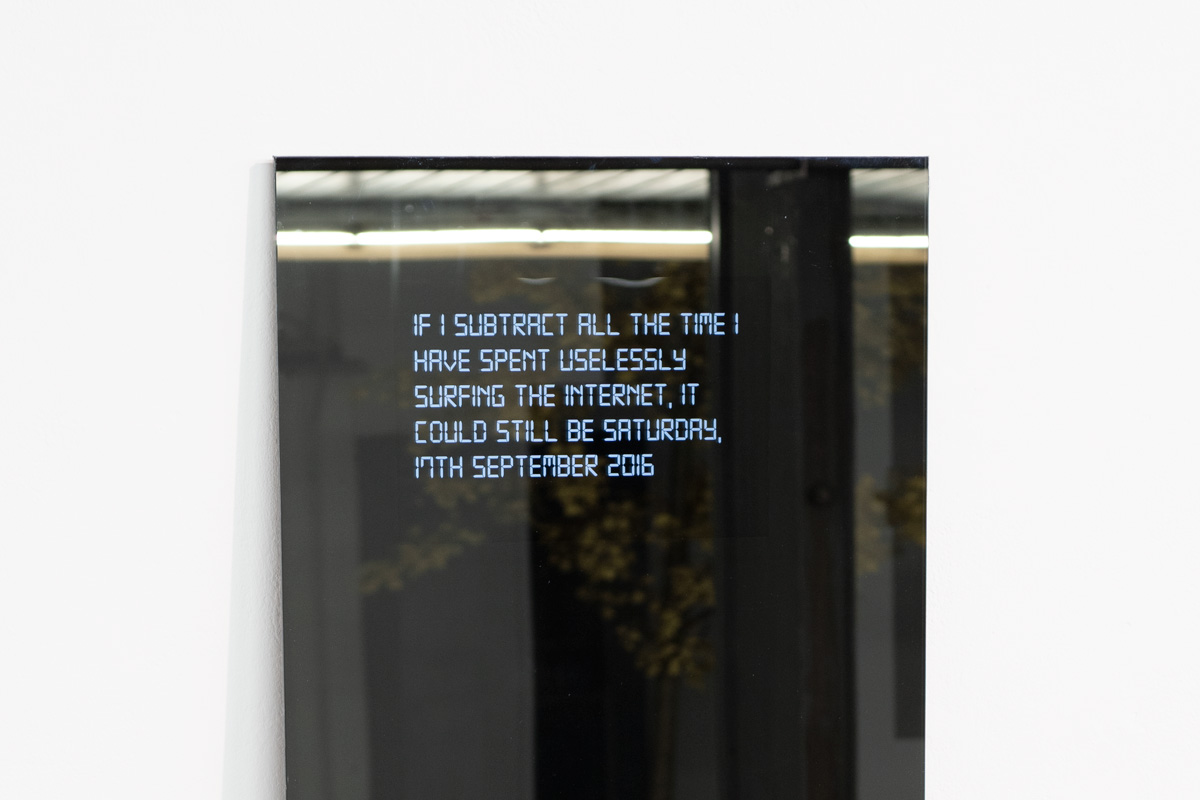 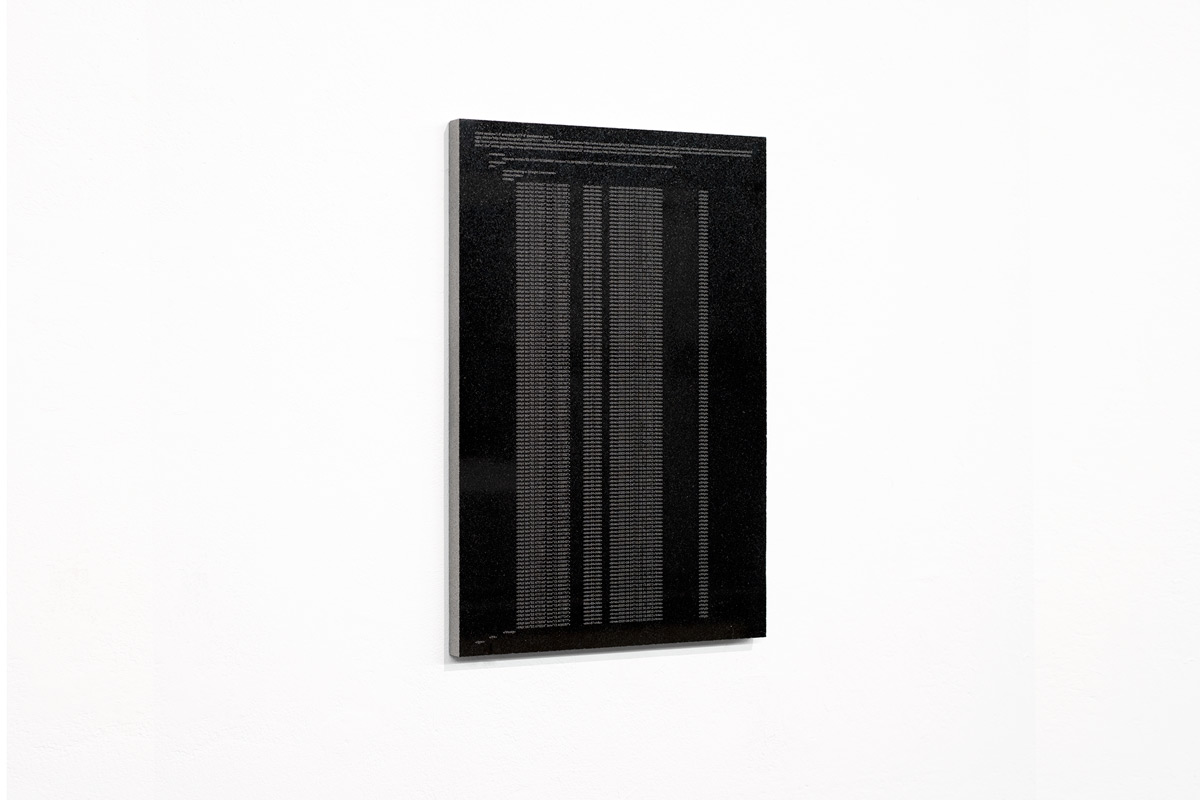 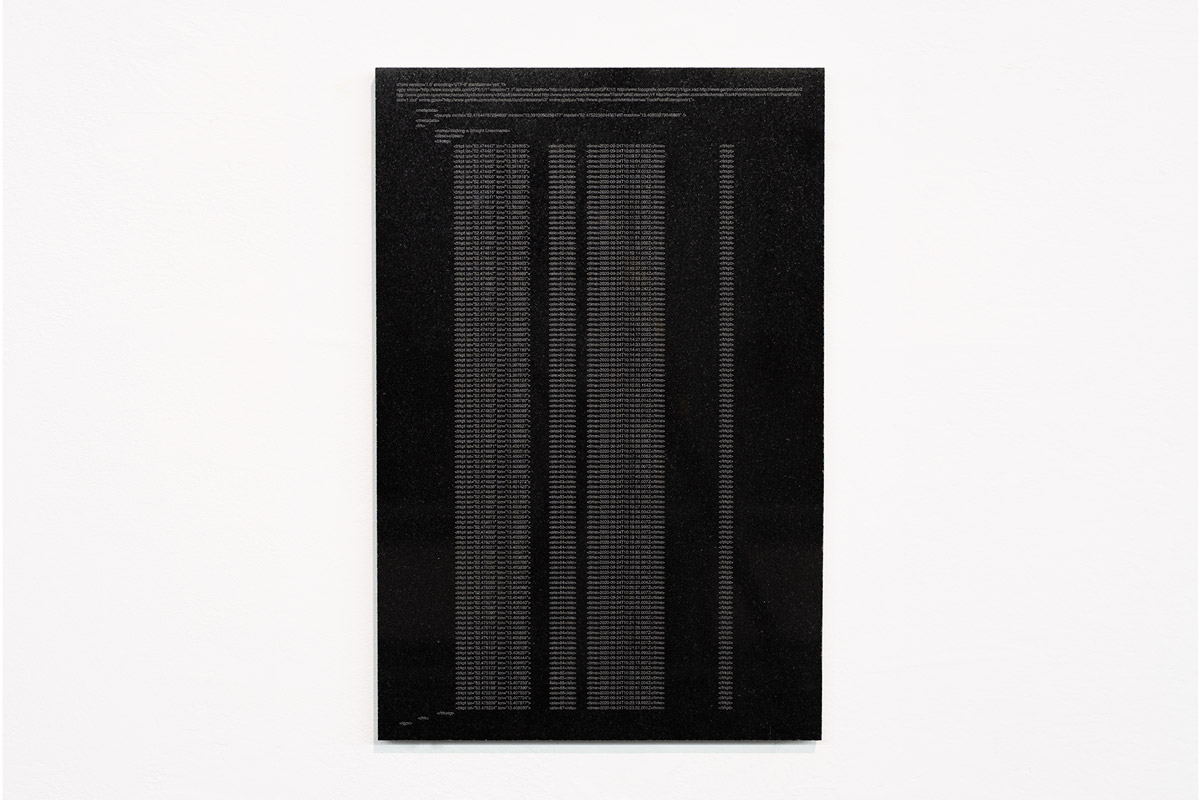 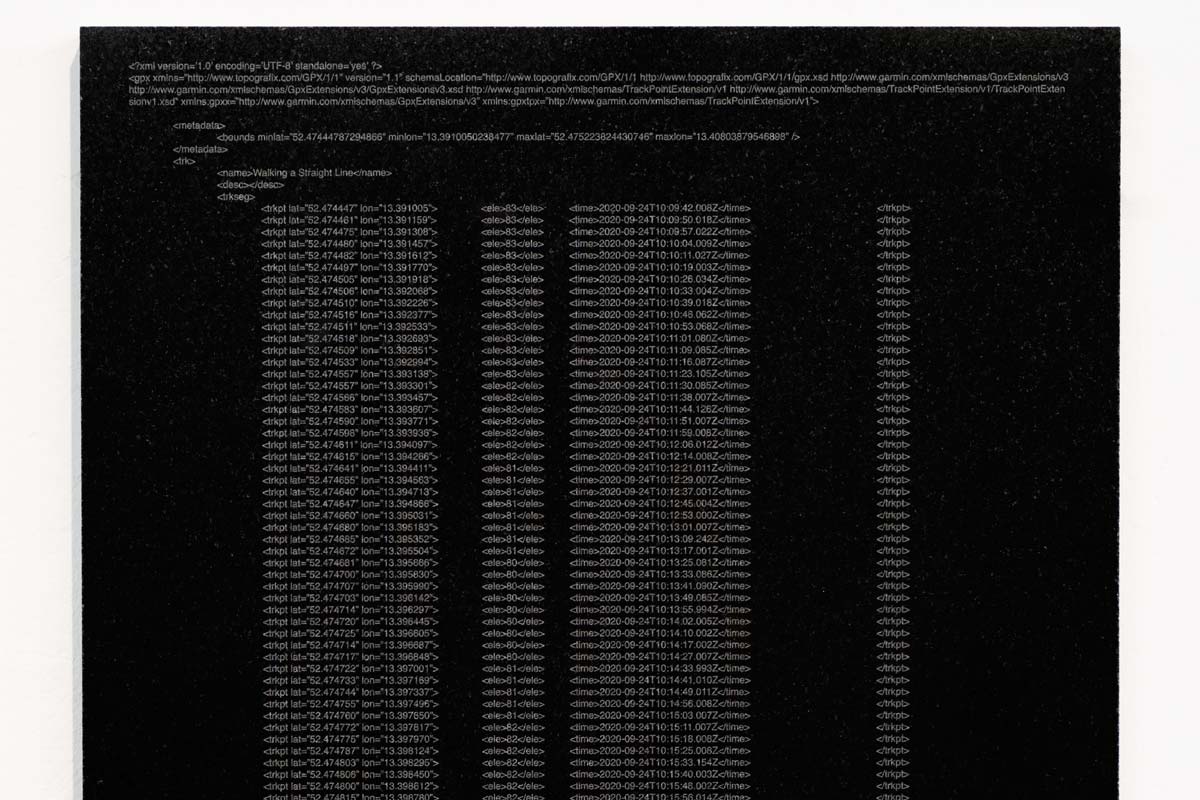 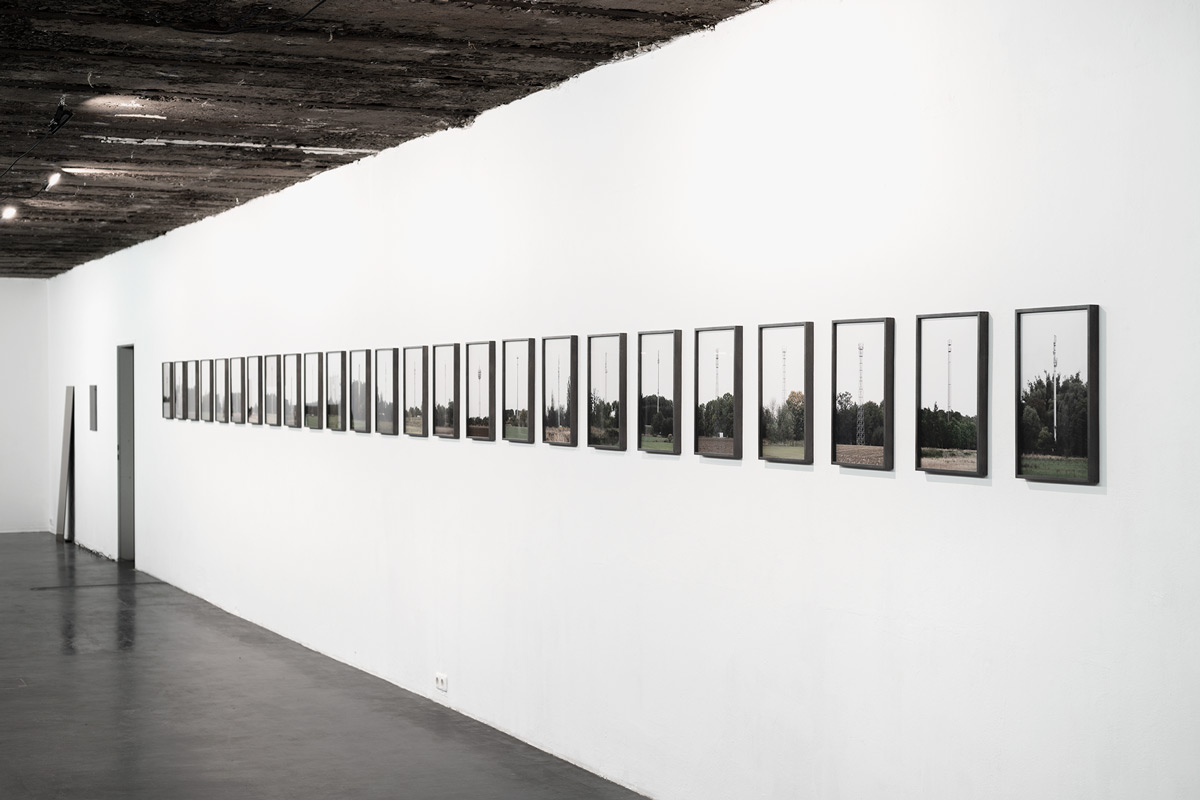 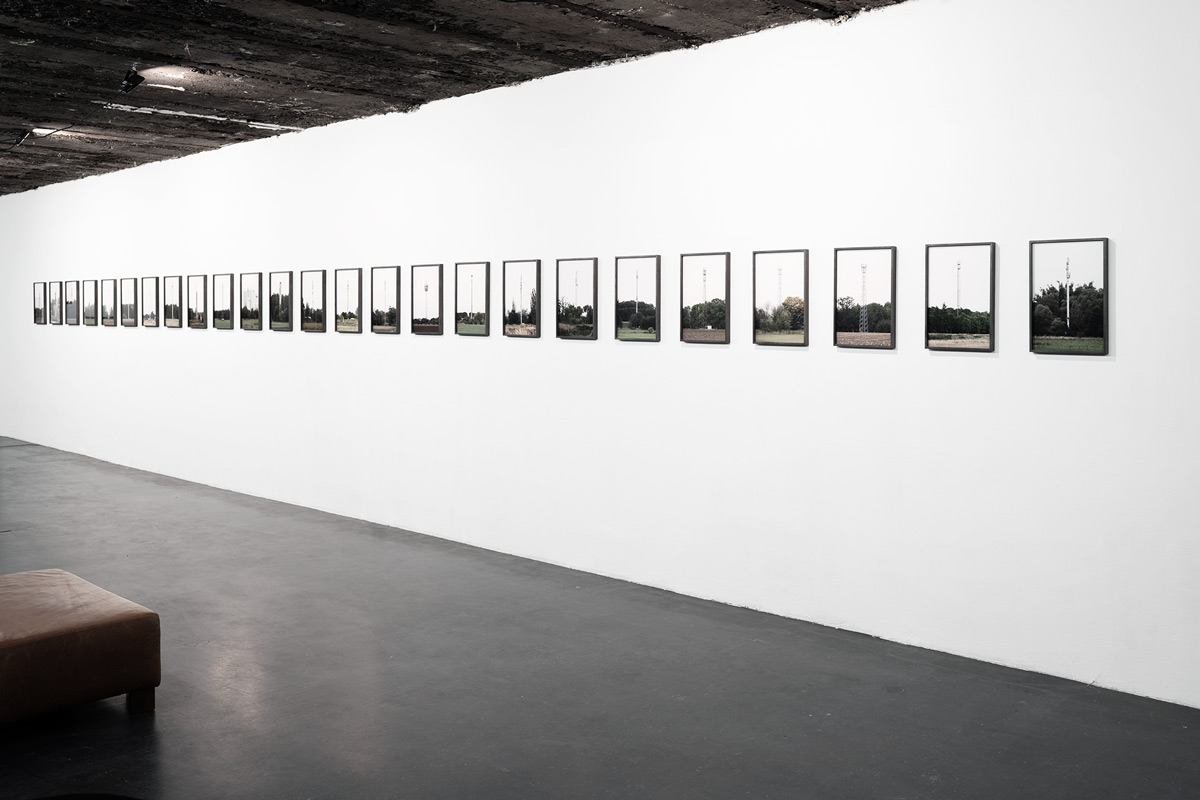 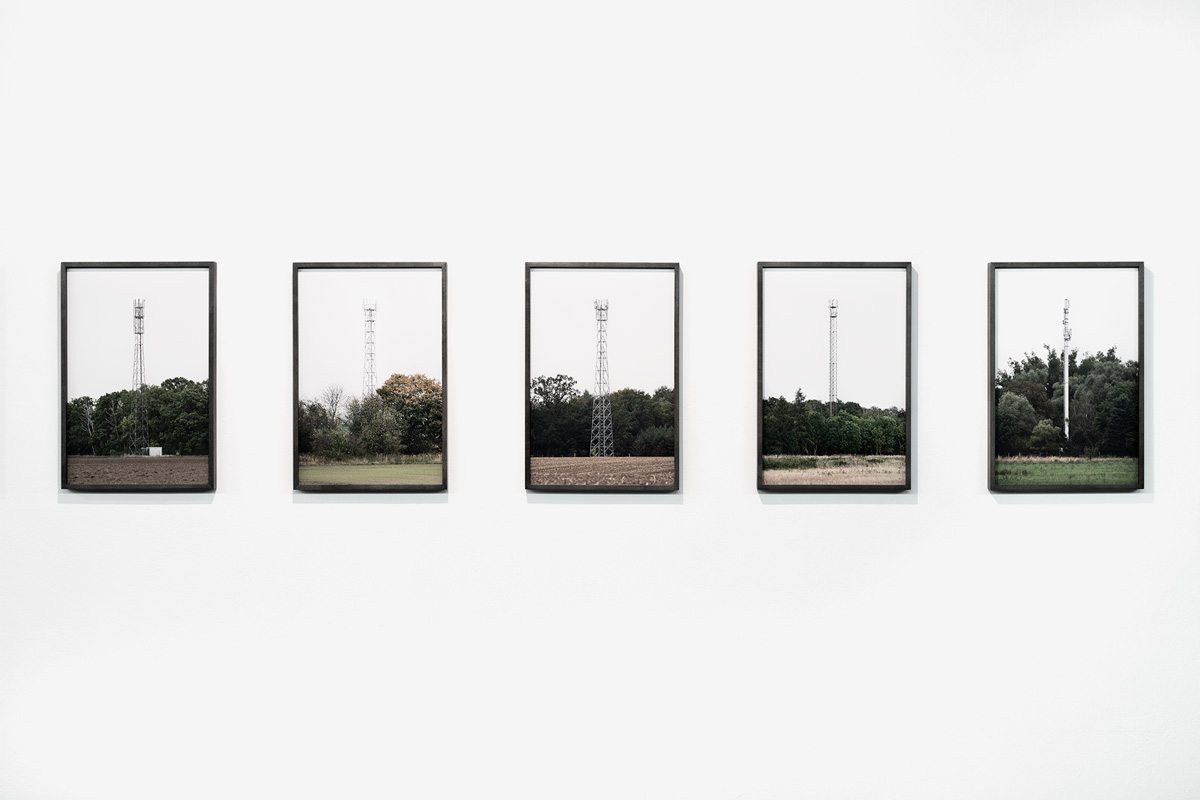 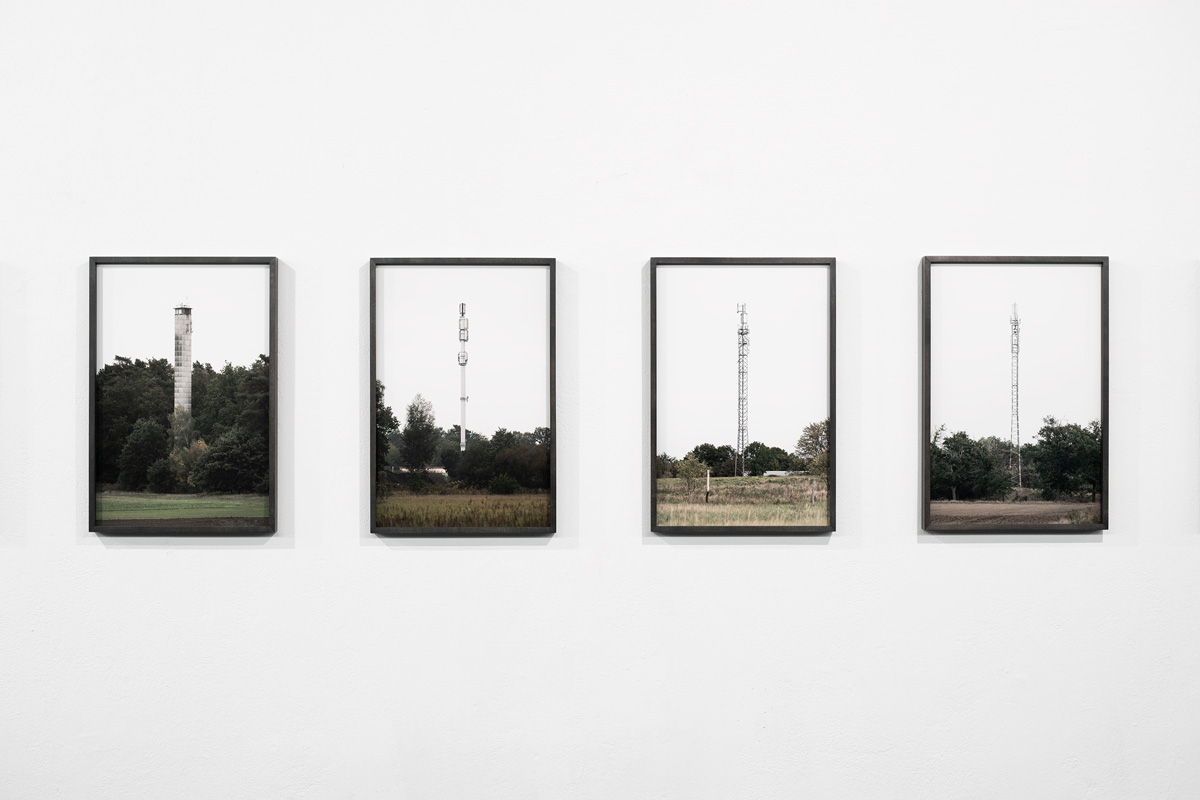 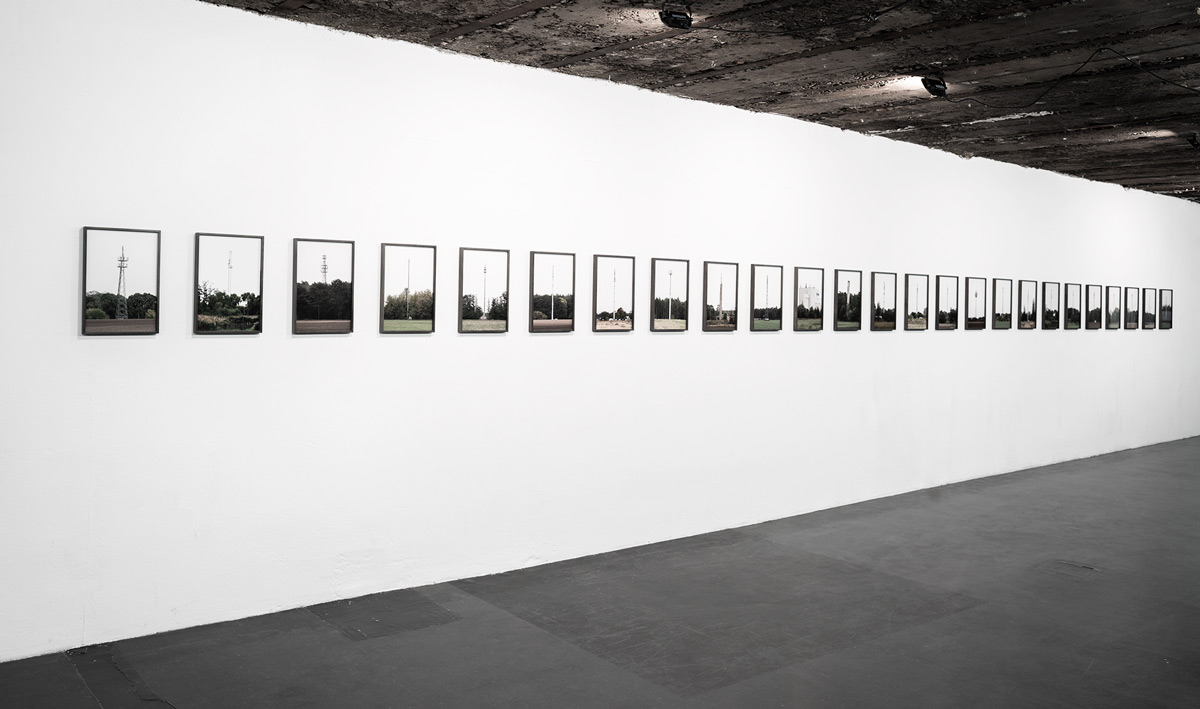 If I subtract all the time I have spent uselessly surfing the Internet, it could still be 2016
Galerie Lisi Hämmerle, Bregenz
7th Nov 2020 – 13th Feb 2021

When Richard Long first presented A Line Made by Walking in 1967, the young artist exemplified those systems of recording that remain a methodological standard in conceptual artistic practices to this day. His photograph of an unspecified meadow near London, through which Long had trampled a straight line, did not simply document the result of an action today considered to be an icon of Land Art. The performance itself was already recording the time it took Long to mark the ground with his steps. In addition, he was processing his own body, the weight and movement of which were responsible for flattening the grass, as data. The arbitrariness of the location—a meadow somewhere in 1960s England—also intensified the reflection on a coordinate system informed by the interaction of the trinity “I,” “here,” and “now.”

Almost 60 years later and in light of issues such as digital surveillance, network capitalism, and the recent resurgence of conspiracy theories, we face not only a changed geopolitical situation, but must also take a different view of recording media. Yet Ruben Aubrecht’s artistic practice nonetheless connects with that of Richard Long. Walking a Straight Line is the title of the first work in a multipart series that uses GPS tracking data recorded by an app to both extract a straight line from the global data network and to re-inscribe a line into this selfsame global network. The artist has had the so-called metadata—text elements that trace the movement Ruben Aubrecht’s mobile phone by logging time and location at certain intervals—laser-engraved into a black stone slab with a polished surface. Like a switched-off, mirror-like black display, the slab features four parallel lines of text, the individual letters of which, when viewed at a distance and without focus, form straight lines—the lines that Ruben Aubrecht, like Richard Long before him, walked as a mean of situating himself in virtual space and time.

That the idea of virtuality, with which Ruben Aubrecht’s work often operates, can become quite tangible and material is demonstrated by the photo series 15 x 15 km. For the 25-part work, the artist defined a 15 x 15 kilometer grid at an unspecified location outside of Berlin and photographically documented all the cell towers within this area. As gray concrete or steel structures, these mostly free-standing architectural structures feel alien in the midst of idyllic landscapes, where they bring a flow of data and information to users’ devices in even the most remote locations: “Janus-faced structures,” as Ruben Aubrecht puts it, “that promise unlimited access to knowledge and information and are simultaneously instruments of total control.” The standardized frontal color photographs that make up the series demonstrate, simply by virtue of their concentration in a fairly manageable area of only 225 square kilometers, how massive the infrastructure is required to enable us to click through the digital network any time, anywhere. What is more, the number of transmitter masts also reveals the vast effort being made on the part of the authorities to establish the necessary structures for total transparency.
How far definitions of “transparency” can diverge—from crystal clear to milky opacity, from see-through to its opposite—becomes evident in Ruben Aubrecht’s Monopol. Like all other online media, the website of self-proclaimed magazine for art and life Monopol requires its readers’ consent in order to process data from cookies and other technologies that register and record their visit. Once clicked on—usually without a closer look, since it’s time-consuming and therefore annoying—we produce invisible lists upon lists of consent several times a day. Compiled in Ruben Aubrecht’s book, sentences such as “Protecting your privacy is important to us,” “We would like to thank you for your trust,” or “What Are Your Rights?” read like a string of repetitive poems about the dystopian state of the present.

In contrast to the representation and surveying of technological infrastructure in 15 x 15 km, the seven-part series New Constellations refers to a dimension that exceeds the human scale. Ruben Aubrecht has created new, technological constellations by imaging geostationary satellites. These artificial earth companions are located along the equator at an altitude of almost 40,000 kilometers above the earth’s surface and accompany the planet as it rotates on its own axis. Since the flight speed of these communications, television, and weather satellites is adjusted to the rotational speed of the Earth, the elements appear to always remain in the same place in the sky. For New Constellations, Aubrecht took long exposure photographs of the night sky that allow him to distinguish these new, immobile, technological fixed stars from all other celestial bodies. As with the cell towers, these new constellations reveal the infrastructure that serve equally to facilitate social exchange and to monitor society.

For the exhibition’s title work, If I subtract all the time I have spent uselessly surfing the Internet, it could still be 2016, Ruben Aubrecht has built a so-called smart mirror—simultaneously a mirror and a display—in do-it-yourself mode. At the opening of the exhibition, the mirror will not only reflect the faces of the people who take a close look at the piece, it will also display the time the artist has spent uselessly surfing the Internet, based on estimates and extrapolations from media use statistics. From its start on 6 November through the course exhibition, the Smart Mirror will track Ruben Aubrecht’s sojourn in the World Wide Web in real time and will make the respective results available for interpretation by visitors to the gallery.